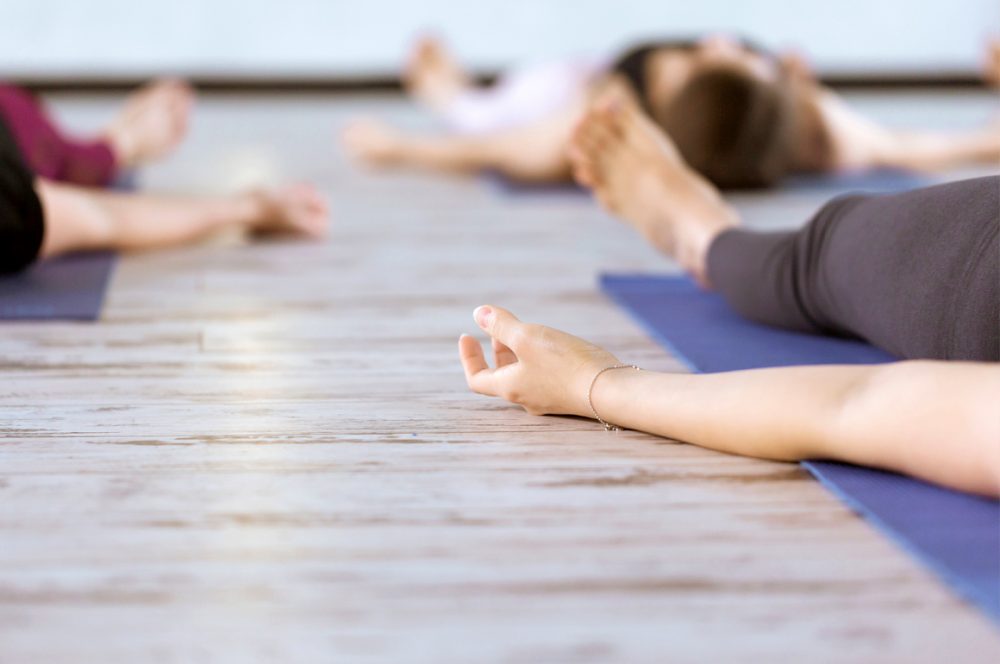 My first memory of Yoga Nidra is as a child when I would a tag along with my mother to her local yoga class, and I’d find myself aimlessly wandering among the ‘sleeping’ bodies in a darkened room.

From my restless child’s perspective this seemingly boring practice didn’t mean a whole lot to me at first.  However, as my mother began to introduce her own adapted version of this practice into the family home, I began to understand the joys of guided relaxation.

As an adult, I now treasure this legacy of Yoga Nidra as a profoundly rejuvenating practice that supports me through stressful and overwhelming times.

To explain Yoga Nidra to the uninitiated is like trying to describe the taste of chocolate to someone who has never sampled its particular delights. It really is a practice that needs to be experienced in order to comprehend its many benefits.   Still, a deeper understanding of the theoretical underpinnings of this classical practice can enhance our experience when we are ready to taste its nectar.

So what is Yoga Nidra? The name itself is essentially a paradox, which appropriately reflects the underlying depths and subtlety of this ancient sacred practice.

‘Yoga’ means ‘union’, or as Yoga Nidra scholar, Richard Miller, pin-points , it can essentially be defined as the “action of awakening to”. If we look at the path of yoga according to the ancient sage and father of yoga, Patanjali, the eighth and final step or ‘limb’ of yoga is delineated as ‘samadhi’ or ‘enlightenment’.  Yoga therefore is a journey of awakening to the light; to ultimately bring us to an awareness of our true self, our essential nature.

The word ‘nidra’ means ‘sleep’.  Therefore, Yoga Nidra can be directly translated as meaning ‘awake-sleep’, or, as described by arguably this practice’s greatest pioneer and creative engineer, Swami Satyananda Saraswati,  “sleepless sleep”. In simple terms this is because the practice involves guiding the body into a deeply relaxed, sleep-like state, yet at the same time keeping the mind quietly alert. According to Swami Satyananda, in Yoga Nidra we foster a state of mind that is in between wakefulness and dream, or what he calls, “dymanic sleep”.

Yoga Nidra involves the involution of the mind and senses: an embodiment of the fifth limb of yoga, ‘pratyahara’ (withdrawal of the senses), in which we create the conditions for the subconscious to assist us in healing, and tapping into our inner wisdom and insight that is not readily accessible by the rational, conscious mind.   In this way, the practice leads us to the successive limbs of Dharana (concentration) and Dhyana (meditation).

Gandhi practiced Yoga Nidra when traveling between speaking engagements; Swami Veda Bharati has used Yoga Nidra to master a new language, overnight! The benefits of a regular Yoga Nidra practice are manifold.  Swami Satyananda says: “It can relax the whole system, awaken the psychic body, give one experiences of the astral plane, shift pressures from the coronary system and also exert an influence on the physical matter in the brain”.

In Pregnancy, Anna Watts notes that Yoga Nidra can enhance the bonding process between the mother to be and baby in the womb. Yoga Nidra is also featured as part of the ‘Moving with the Moon‘ approach to self care for women, because of it’s numerous benefits and accessibility even for beginners.

The power of Yoga Nidra lies in the induction of what psychology calls a ‘hypnagogic state’ or what Swami Satyananda prefers to call a ‘hypnayogic state’. This state of receptive relaxation enables us to access our intuition that can bring insights that help us to answer many of life’s dilemmas. This can work in the same way as when, after a good sleep, we awake with a new solution to a problem in our lives.

The ingredients of Yoga Nidra

As a yoga teacher and teacher trainer many students have asked me about the difference between Yoga Nidra and the supine relaxation, Savasana, that is routinely practiced at the end of a yoga class. Savasana is generally taught with little or no verbal instruction and is usually shorter in duration. Yoga Nidra, by contrast, is intricately guided for approximately 30 minutes. Aside from the all-important rotation of awareness around the physical body which brings the practitioner into a receptive relaxation, the efficacy of Yoga Nidra lies in the systematic order in which the instructions are delivered, and its unique ‘ingredients’.

The power of intention

Among the key ingredients of Yoga Nidra is the setting of a ‘sankalpa’ or positive resolve or intention, at the beginning and end of the practice.  According to Satyananda Yoga Teacher, Swami Gurupremananda Saraswati, this short, affirmative statement is like a “seed, planted deep in the subconscious soil”.  She says that each time you repeat your sankalpa in Yoga Nidra you “water this seed” and “stimulate its growth’, helping to bring your intention into reality.

The practice of sankalpa is at the core of the transformative power of Yoga Nidra. We can use sankalpa to positively reframe our lives; to shed bad habits and ‘samskaras’ (psychic patterns or ‘grooves’).  “Anything in life can fail you, but not the sankalpa made during yoga nidra”, asserts Swami Satyananda.

Another important element of Yoga Nidra is the fostering of a sense of detachment that we obtain when we step back from our dualistic feelings of attachment and aversion. This is done by encouraging the practitioner to become like a ‘witness’.

Firstly, we consciously relax the various body parts, then we witness the natural rhythm and pattern of the breath. Next, we note the sensations of the body, including opposing sensations such as heaviness and lightness, heat and cold; and finally, we visualize a series of symbolic images, as if we were sitting back and ‘watching’ a movie.

It is with this cultivation of the impassionate observer that the sweetest rewards of Yoga Nidra can be had. Through regular practice we embark on an inner journey that can cement for us what Richard Miller calls an “unshakable equilibrium”.

“In its ultimate revelation, Yoga Nidra points directly to your True Nature, to peace that is beyond description and is your birthright. This peace is not an empty promise or only for a selected few, but is present and available to you right now”, says Miller.

A version of this blog by Ana Davis was originally shared via www.byronyoga.com

To encourage the act of ‘giving back to yourself’, we would like to share with you a nourishing Dark Moon (Menstrual) Phase Yoga Nidra audio practice from ‘Moving with the Moon – Nurturing Yoga, Movement and Meditation for Every Phase of your Menstrual Cycle and Beyond‘ by Ana Davis. This is one of the 22 audio tracks that accompany the book as an optional add-on, which also include guided Yoga Nidra practices for the Full Moon (Ovulation) and Waning Moon (Pre-Menstrual) phases of your cycle.