On the flipside: inversions during menstruation 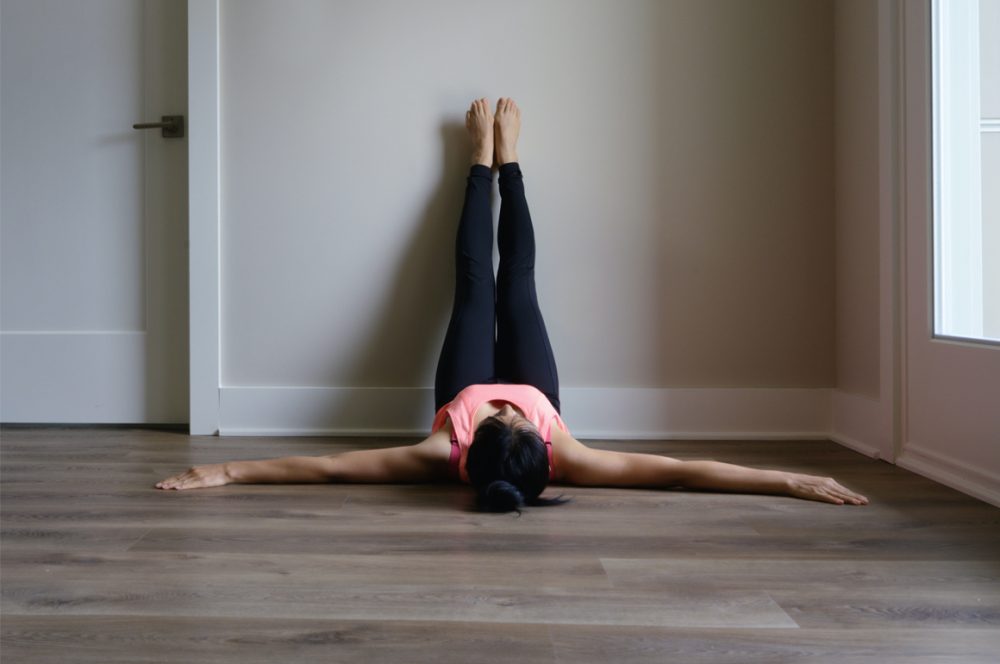 Do we really have to avoid inversions during menstruation? The short answer is, yes.

Not everyone agrees, though.

This can be a recurring point of contention on yoga discussion boards. I’ve seen arguments that suggest ‘making’ women modify or avoid certain yoga practices during their period is an anti-feminist practice that degrades women. This assertion comes in reaction to ancient, often patriarchal traditions that separated women during the menses from the rest of the family or society as they were considered ‘unclean’ or ‘impure’.[i]

I’ll argue in this blog, when viewed from the contemporary feminine yoga perspective, it’s actually quite the reverse. If we don’t acknowledge the unique needs of our feminine bodies, by adjusting our yoga practice, especially during our monthly bleed, we are doing ourselves a great disservice. A feminine yoga approach, which includes avoiding or modifying the traditional inverted postures, is a wonderful way to support and honour ourselves as women during our monthly cycle.

Why? Well, that’s part of the long answer, which is, well, long! So, buckle up and let me try to explain why inverted postures are not ideal to practise during your period for both energetic and physiological reasons.

To begin, it’s important to understand that this discussion is part of an even bigger topic. There’s so much to say about modifying your yoga practice for not only your menses but also throughout the entire menstrual cycle that I’ve written a book about it—Moving with the Moon: Yoga, Movement & Meditation for Every Phase of your Menstrual Cycle & Beyond.  So, I’ll offer a summary here to provide context and make a case for avoiding or at least modifying inversions during the bleeding phase of your cycle.

According to my ‘moving-with-the-moon’ philosophy, the menstrual cycle is divided into four phases that can metaphorically correspond with the phases of the moon. Menstruation represents what I call the Dark Moon phase and is the time in the cycle when a woman’s energy is at its lowest— physically and energetically. Hormone levels have plummeted and the immune system is actually at its most vulnerable at this point in your cycle. [ii] This explains why it’s not unusual to feel tired and even a bit wiped out for at least those first few days of your period.

Of course, this is not always the case, every person is different, but even if you feel filled with energy at this time and want to do a strong practice, there are a few reasons why it’s worth considering adopting a gentler, more Dark Moon focused practice.

The main reasons all fall under the overriding feminine yoga principle that promotes physical and energetic softness during this phase. The idea is to avoid a strenuous practice that can further deplete a woman’s already depleted energy; we want to go with (rather than against) the natural energy of the bleeding time in which the uterus is working hard (in my book, I call it the ‘mini birth’) to shed the lining of the endometrium.

We want to encourage a nurturing, restorative practice that will rebuild a menstruating person’s physical and psycho-emotional energy, and from an Ayurvedic point of view, this means fostering apana—the grounding, downward movement of energy that is such an important aspect of a feminine approach to yoga.

Even modern science is catching up with this idea of going gently during the menstruation. Dr Andre Marhol a Primary Care Physician, GP and Medical Advisor at Flo cautions that ‘strenuous or prolonged exercise’ is best avoided during menstruation, and cites a study that found ‘60 minutes of moderate to intense exercise during menstruation caused exercise-induced inflammation.[iii]

Inversions like headstand, handstand and even shoulderstand require a certain amount of energy and dynamism to perform that is not always naturally present during our bleed, as we’ve seen.

In addition, from a Western, physiological point of view, inverted postures can be associated with vascular constriction (see Mary P. Schatz, M.D & Judith Lasater[iv]) which can cause a temporary cessation of the flow and then a heavier return.

Inverted postures can also potentially cause injury in the sacrum and lower back during this time of the month as we tend to have a higher level of the hormone relaxin in our bodies, which can cause instability in the lower back, sacrum and/or pelvic area by softening the joints and soft tissue there.

Plus, when practising the more active inversions like handstand and headstand, we should ideally recruit our abdominals to bring stability in the pose—i.e., core activation— but most women will find that they have less access to these core muscles during their bleed. Our abdominal and pelvic floor muscles feel less switched on and naturally soften and it feels counterintuitive to engage them. Just try doing a Boat Pose (Paripurna Navasana) when you’re heavily bleeding—it’s generally not fun!

Another reason to avoid or modify inversions and other more, strong, ‘yang’ postures such as dynamic backbends and twists is due to what I call the ‘mini birth’.

The uterus is one of the strongest muscles in the body by weight—it needs be strong to push out a baby—and it’s working hard every month to eliminate the menstrual blood. The menstrual cramping that about 80% of women experience is a testament to our hard-working womb. I suggest that we want to support this mini-birth and that means not going upside down. Think about it, a woman doesn’t stand on her head when she’s actually giving birth, so why do this for her monthly mini-birth?

Energetically, inversions also go against apana (downward movement of energy) that Ayurveda claims is beneficial for women’s health. We want to support the monthly process of detoxing, helping our body release what Ayurveda calls ama in order to promote optimal reproductive and overall health. This is apparently where we’re lucky as women—that we have this opportunity for monthly cleansing and renewal. So, inverting, not only goes against the literal flow of the blood but also the energetic flow.

By suggesting we avoid inversions doesn’t mean we can’t do some of the more gentle, restorative variations, like simple, unpropped Legs up the Wall (Viparita Karani) or Chair Savasana (see illustrations).

In these postures, the pelvis is not elevated, but the legs are, they offer wonderful relief from the feeling of heaviness in the legs caused by fluid retention and the natural fatigue at this often lower-ebb-time.

Let me stress that a feminine, cyclical, moving-with-the-moon approach never suggests that we must avoid yoga practice altogether when we bleed. It’s not about some kind of draconian idea of banning women from their yoga practice. Instead, a feminine approach to yoga is all about honouring our bodies, minds and emotions during our cycle and supporting the commonly experienced lower ebb of energy with restorative, menstrual-friendly yoga. This means softening a more ‘yang’ practice which might include the active inversions.

According to both Ayurveda and Traditional Chinese Medicine, from which a feminine approach to yoga draws much inspiration, if we can take time to nurture ourselves, to rest, during our period, our body will repay us with greater energy and even enhanced fertility for the remainder of the month.

Therefore, a more restful and gentle Dark Moon yoga practice is like investing money in your energetic bank. It pays back with interest!

[i] In my book Moving with the Moon: Yoga, Movement and Meditation for Every Phase of the Menstrual Cycle and Beyond, I devote a whole chapter to covering the ‘her-story’ of menstruation, showing that for many cultures, menstrual separation has its roots in matriarchal honouring, based on beliefs that menstruation is in fact sacred and to be revered.

[ii] The body can be particularly receptive to outside factors during the menstrual cycle, such as stress and immune system cell changes’, notes the United States National Library of Medicine. ‘The body goes through its cyclic repair during menses, as the many molecular and cellular interactions that are part of menstruation take place. Keeping your body healthy and your immune system at its strongest is especially important at “that time of the month”’ (See: www.livestrong.com.) The research paper, ‘Impact of Stress, Gender and Menstrual Cycle on Immune System: Possible Role of Nitric Oxide’ by scientists from the Department of Physiology, Hacettepe University Medical Faculty, Turkey, concludes, ‘The luteal phase differed from the other groups due to the presence of suppressed immune response to acute stress.’ (See: https://cyclesresearchinstitute.wordpress.com/2010/06/26/impact-of-stress-gender-and-menstrual-cycle-on-immune-system-possible-role-of-nitric-oxide/ .) Alexandra Pope, in The Wild Genie writes, ‘The immune system, our physical boundary, which is more vulnerable premenstrually, appears to mirror the thinning of psychological boundaries. I’ve encountered a number of women who get flu symptoms before they bleed as well as sometimes before ovulation. Women with chronic health problems, such as allergies and inflammatory conditions often find their symptoms increase at these times.’ (p.81).

[iv] See: Mary P. Schatz, M.D. online article, ‘A Woman’s balance: Inversions and Menstruation’ (http://yoga4leongal.blogspot.com.au/2009/05/womans-balance-inversions-and.html_—‘During inversions, the uterus is pulled toward the head by gravity, causing the broad ligaments to be stretched. This can cause stretch and partial collapse or occlusion of the thin-walled veins, while allowing the uncollapsed arteries to continue to pump in blood. Thus, more blood enters the uterus via the arteries than can be carried away by the veins. The vascular congestion that results can lead to increased menstrual bleeding,’ writes Schatz. Interestingly well known yoga teacher and physical therapist, Judith Hanson Lasater says Inversions may cause the vessels supplying blood to the uterus to be partially blocked by the weight of the uterus as it’s pulled by gravity, Lasater says that Inversions can therefore cause a temporary decrease or even cessation of the menstrual flow followed by a sometimes heavier flow. See Judith Lasater PhD., Relax and Renew: Restful Yoga for Stressful Times, p.158. Either way, whether you subscribe to Schatz’s or Lasater’s view, they both agree the result is heavier bleeding, which suggests it’s best to avoid Inversions when we bleed. And, since research on the both the benefits and dangers of inversions for female yoga practitioners (or all practitioners for that matter) is still very slim, it’s all we have to go on for the moment.

Further Reading related to this topic: